Malicious actors are poisoning your artifacts in an attempt to infect your software supply chain so that you deploy those compromised (i.e. poisoned) artifacts to your production servers. In the worst scenarios, your production software then serves as a distribution mechanism for the poisoned artifact to additionally compromise your own customers and users.

Let’s picture a modern CI/CD pipeline – one that is probably like yours. The pipeline starts with an SCM where your code waits for the build server to pick it up and produce a set of artifacts. The artifacts are packaged, then uploaded to an artifact registry, where they are stored for a while before being deployed.

When a release occurs, the artifacts are pulled from the registry and deployed to your production servers, serving your customers with your latest and greatest software. (What a beautiful picture!)

But what if someone gained access to your registry and replaced your artifact with a different, malicious artifact? This is called artifact poisoning.

(Note: You may know or refer to “artifacts” as “packages” or vice versa. For purposes of this blog, consider the two terms interchangeable.) 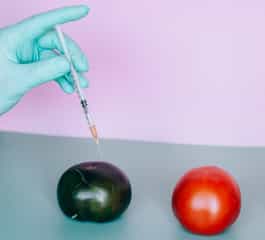 What Is Artifact Poisoning?

Artifact (aka, package) poisoning refers to the alteration or modification of software artifacts and packages by a malicious actor. This was the case with the infamous attack on Codecov, where attackers used leaked credentials to upload a malicious artifact to a GCS bucket (Google Cloud Storage), from which users then downloaded the malicious artifact directly.

By gaining access to your registry server, a malicious actor could replace your artifact with a malicious one. The replaced package could act exactly like the original one, except for an additional, harmful piece of code that could:

Even worse, distributing your infected software to other vendors who rely on it could be the perfect way for an attacker to initiate a destructive, industry-wide supply chain attack - as we saw in the case of SolarWinds. Am I At Risk of Artifact Poisoning?

How To Prevent Artifact Poisoning 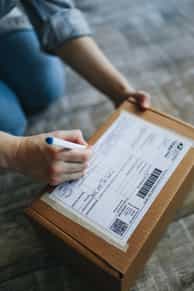 A Digital Signature enables one party to state that a piece of media is trusted by them, using a private key. By sharing the associated public key, consumers can verify that the media is authentic (created by them) and has integrity (not altered or tampered with).

By signing artifacts before uploading them to the registry, you guarantee that the artifacts were not tampered with after they have been uploaded. Sharing your public key (with your CI/CD pipeline and customers who directly consume artifacts) allows everyone to verify the authenticity of the artifacts.

Obviously, many questions come to mind:

To answer those questions, let’s take a look at cosign as an example so we can learn why we should be extra cautious with it, and how we should use it to address the problem.

Cosign is the CLI client for the sigstore toolchain, which is a set of tools and standards for signing, verifying and assuring software integrity. It provides key-pair generation; signing; and verification of artifacts. 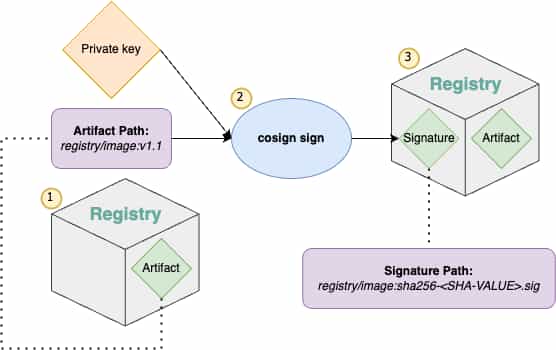 While simple and straightforward, an elusive security weakness is lurking in this flow. To understand it, we need to take a small step back and talk about how artifacts are typically used.

There are two primary ways to reference artifacts: digests and tags.

Although a digest maps directly to the content of the artifact, it does not provide a contextual meaning for its user and is fixed to a specific version of the artifact.

So users use tags instead. Tags are labels that can be attached to artifacts. They serve as aliases for specific versions of the artifact. For example, with tags a user can always use “image:v1.1” to get the last version of the desired image.

One type of tag that deserves special mention is an immutable tag, which are used for different purposes. Only some registries support these types of tags. The “latest” tag, for example, does not make sense with immutable tags because it cannot be updated once the new version is introduced.

To wrap it up, here’s a brief comparison of digests and tags:

The differences between digests and tags may seem minor, but these small differences can greatly impact whether or not your software supply chain is compromised.

Using Cosign With Artifact Tagging Is A Security Risk!

So, you have your package ready for uploading. You add the v1.1 tag, upload it to the registry, then invoke cosign on image:v1.1 to sign it. OOPS! 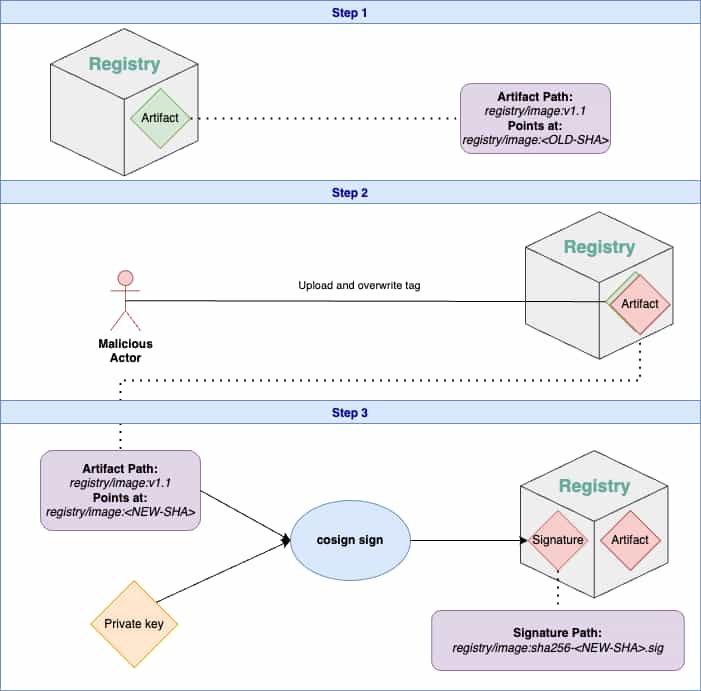 First, let’s clarify the root issue in play: we want to make sure that we sign the artifact that we created. Since tags are aliases and the registry is remote, signing based on a remote tag allows a malicious attacker to initiate a MITM (man-in-the-middle) attack and point the tag somewhere else, causing us to sign the wrong artifact.

To prevent the attack, we have two options:

Instead of using cosign with tags, use digests. You can then add whatever tag you want directly on the remote registry.

Since the digests map directly to our image, we can be certain that we sign the correct image.

If the attacker alters the tag on the remote side after we tag it, verifying the image will fail because the digest on the signature does not match the digest of the image.

This method requires you to use digests rather than tags, which may be less familiar.

Note that this does not prevent you from continuing using tags throughout the rest of your registry actions, which includes during verification. You just need to be careful when signing!

We can first set up a local registry, upload the image to it, and use cosign to sign it locally. Then, we can upload both the image and the signature to the corresponding paths on the remote registry.

In this blog, we discussed artifact signing and why doing so is crucial to harden your CI/CD pipeline to protect against the injection of malicious artifacts (aka, artifact poisoning). Further, we learned that securely signing artifacts is not as straightforward as it might seem, even when using the most popular off-the-shelf signing tools.

Artifact poisoning is just a single type of attack on a single point in your software supply chain, but can be used to create industry-wide headlines as we saw in the Codecov incident when their artifacts were poisoned. To most effectively reduce your risk from software supply chain attacks, examine your attack surface holistically. For example:

Software Supply Chain Risks: What Every CISO Needs to Know

As software technology evolves, it’s being continuously integrated into nearly every aspect of business processes. And while this has given many...

Malicious actors are poisoning your artifacts in an attempt to infect your software supply chain so that you deploy those compromised (i.e. poisoned)...

A popular vendor of Magento-Wordpress plug-ins/integrations with over 200,000 downloads, has been hacked. This recent attack is a reminder that...