The Legit Security Research Team discovered a new class of software supply chain vulnerabilities that leverages artifact poisoning and attacks the underlying software development pipelines for projects using GitHub Actions. In this fourth blog covering vulnerable GitHub Actions, we will explore this new technique of artifact poisoning and describe who could be vulnerable, including how we found this vulnerability in the Rust programming language and assisted in its remediation.

We have discovered that when transferring artifacts between different workflows, there is a major risk for artifact poisoning – a technique in which attackers replace the content of a legitimate artifact with a modified malicious one and thereby initiate a supply chain attack.

This is similar to the CodeCov supply chain breach, where attackers put a backdoor into one of Codecov’s artifacts which were later used by users to update their software and thereby got hacked.

If you haven’t had the chance to read our previous posts in the series, you can find them here:

Artifacts are the products of the work done in the CI/CD pipelines and are usually used to:

“rust-lang” is the official Rust project in GitHub, and the vulnerability we found is in the “rust-lang/rustc_codegen_gcc” repository, and could allow any user to execute code in a privileged pipeline. This gave any user the ability to write code that extracts repository secrets like cloud credentials, modifies project settings and even tampers with the source code using GitHub API, since the privileged pipeline has access to all that.

The vulnerability was found in a workflow called “ci.yml” which is responsible for building and testing the repository’s code. Below is the vulnerable part of the workflow (you can find the full workflow here). 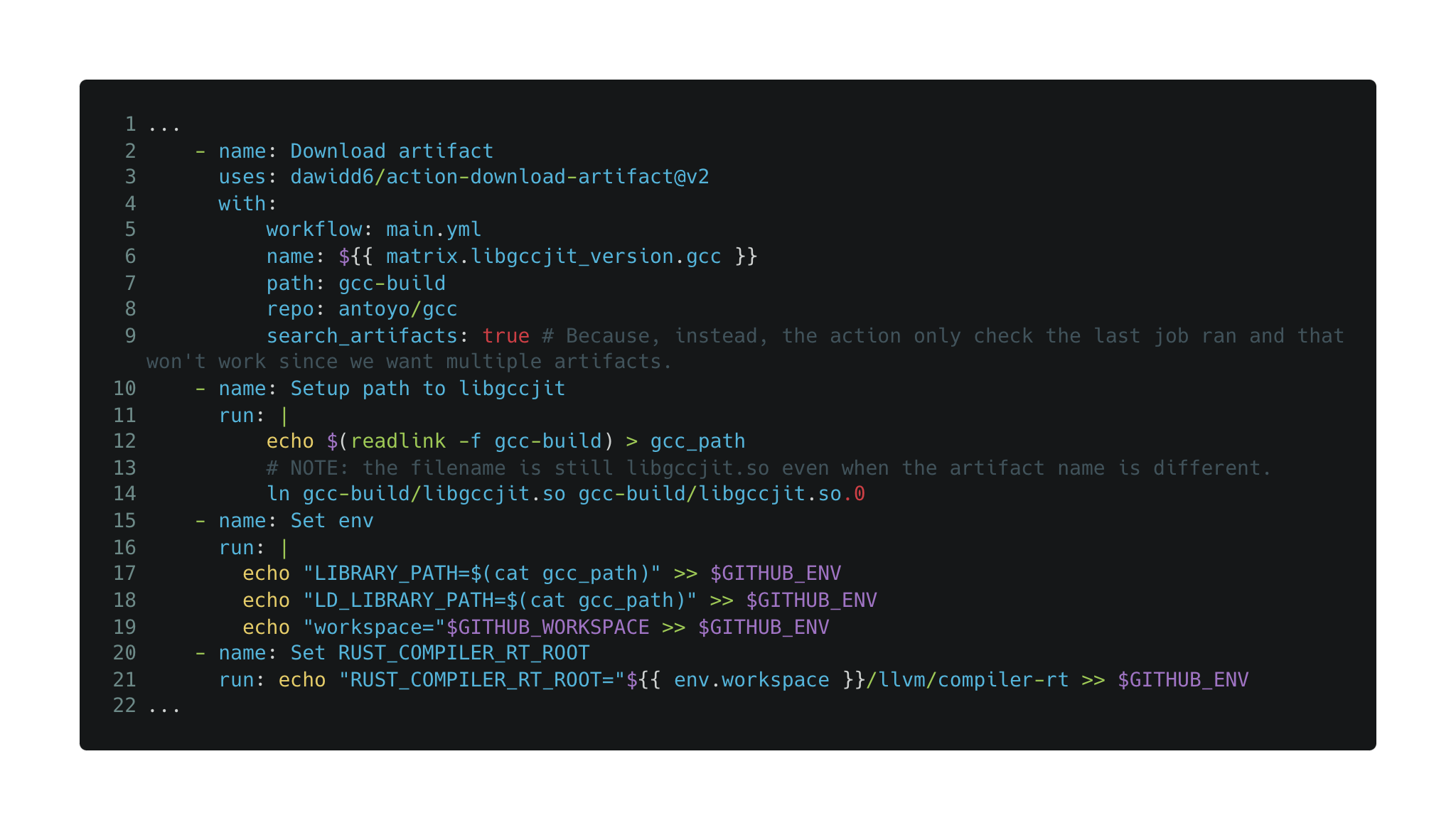 In step “Download artifact”, the workflow downloads the “libgccjit.so” library from the “antoyo/gcc” repository and in step “Set env” it sets the runner to use it by modifying the linker environment variables.

If we could trick the workflow into downloading our own “libgccjit.so” library, we could make the runner use our library and execute arbitrary code in the workflow. Let's see how that is possible.

The “action-download-artifact” action downloads the latest artifact named $$ from another repository, named "antoyo/gcc", as part of "main.yml" workflow. Surprisingly it doesn't distinguish between artifacts that were created by forked versions of "antoyo/gcc" repository and the original one.

To initiate the attack, we simply need to:

Consequently, we trick the rust workflow into pulling our poisoned artifact and executing it in the subsequent steps of the workflow. 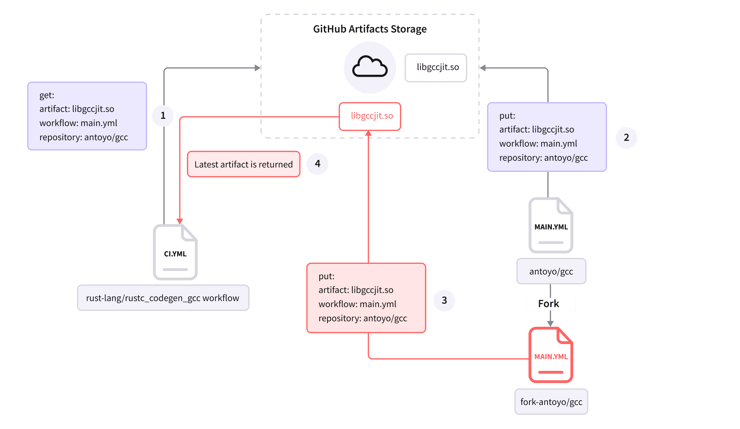 Watch a short demonstration of an artifact being poisoned with a malicious code injection to better understand how a bad actor can compromise your privileged pipelines using the techniques covered in this blog.

Watch A Video Demonstration of A Malicious Injection

Depending on Rust’s specific configuration, a skilled attacker could probably use these permissions to extend the attack outside the vulnerable repository to additional Rusts assets and move laterally inside the organization.

The artifacts storage is divided into buckets. Each workflow run (an instance of workflow file invocation) is assigned a unique bucket to which only jobs within that workflow can upload artifacts to (the workflow is identified by its run_id).

These actions use the bucket’s API to upload & download artifacts from the currently assigned bucket.

The limitation and the workaround:

This is not possible with the native GitHub-provided actions.

To overcome this limitation, workflow authors started to use GitHub-provided API that allows downloading artifacts from other workflows based on some filtering capabilities (i.e., artifact created by a specific workflow file, specific user, specific branch, etc.).

To put it simply: in a vulnerable workflow, any GitHub user can create a fork that builds an artifact. Then inject this artifact into the original repository build process and modify its output. This is another form of a software supply chain attack, where the build output is modified by an attacker.

One of the most common custom actions that aim to overcome this limitation is dawidd6/action-download-artifact, which has above 12K dependent repositories.

Let's show how it can make your workflow vulnerable: The following workflow is a manually triggered workflow that pulls the last built image from the ‘build.yml' workflow and publishes it (copied from a real repository):

Now, since the workflow author doesn’t specify explicitly from which run id the artifact should be downloaded, an adversary could take the following actions to inject a malicious artifact:

Once the manual workflow runs, it will download and publish the malicious artifact instead of the intended one. This is because ‘action-download-artifact’ is not limited to the current bucket limitation, and we uploaded an artifact that matches the provided search criteria.

It appears that the vast majority of ‘download-artifact’ custom actions are vulnerable. Here are a few examples:

1- Specify which run id or commit hash to download the artifact from. 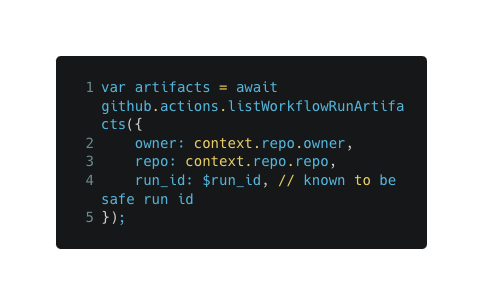 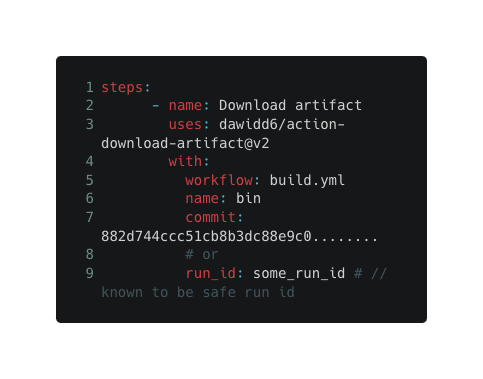 2- Filter out artifacts that were created by pull-request. 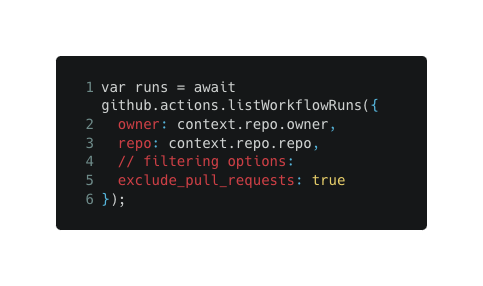 3- Never trust the content of cross-workflow artifacts. Always sanitize the payload before using it. For example, if you expect a pull-request number make sure the value is a number.

4- Make sure you control which workflows are allowed to run by enabling “Require approval for all outside collaborators” in Repository → Settings → Actions → General.

This security issue was reported to GitHub through their bug bounty program. They acknowledged it and updated the GetArtifact and ListArtifacts APIs to provide more information that would help developers differentiate between trusted artifacts and untrusted ones. Yet, they decided that the fundamental issue of cross-workflow artifacts is not a significant risk and should be handled by the workflow authors. So once again, it’s up to the repositories maintainers to make sure they are safe. We highly encourage workflow authors that use GitHub artifacts across different workflows to use the suggested mitigations.

How Legit Security Can Help

The Legit Security platform connects to your GitHub organization and detects vulnerable workflows such as this one in real-time and much more. If you are concerned about these vulnerabilities and others across your software supply chain, please contact us or request a demo on our website.

Everybody is familiar with downtimes in major services. It can be very frustrating when a platform your organization depends upon becomes...