At Legit Security, we’re focused on preventing software supply chain attacks and securing the SDLC for our customers and the broader cybersecurity community. We recently discovered GitHub-Actions pipeline privilege escalation vulnerabilities that can open the door to software supply chain attacks and we’re publishing this technical disclosure blog to assist organizations in remediating it.

This is important to us because, a) each insecure open source project might be the weak link in our customer's supply chain and could lead to massive security issues; and b) we want to make the software development ecosystem secure for everyone to use.

In this blog post, we will share some important findings from our GitHub Actions security research and recommend how you can keep your pipelines secure. GitHub is an extremely popular source code management system. One carefully targeted exploit of this vulnerability could have massive downstream consequences, so in addition to the responsible disclosure we've already made directly to GitHub, we want to do everything we can here at Legit Security to inform the community.

GitHub Actions In A Nutshell

GitHub Actions is a CI/CD platform built within GitHub, both in its cloud service and on-prem Enterprise Server; it allows a project to run custom functionality in response to events on GitHub. For example, every time new code is merged, a workflow can be triggered to build the code, test it, and deploy a new version.

GitHub introduced the notion of pwn request in a blog post from December 2020; a pwn request is a pull request that exploits vulnerabilities in the project workflows in order to access the project secrets or modify its content. Why is this interesting? The format in which open source projects are developed is the following: 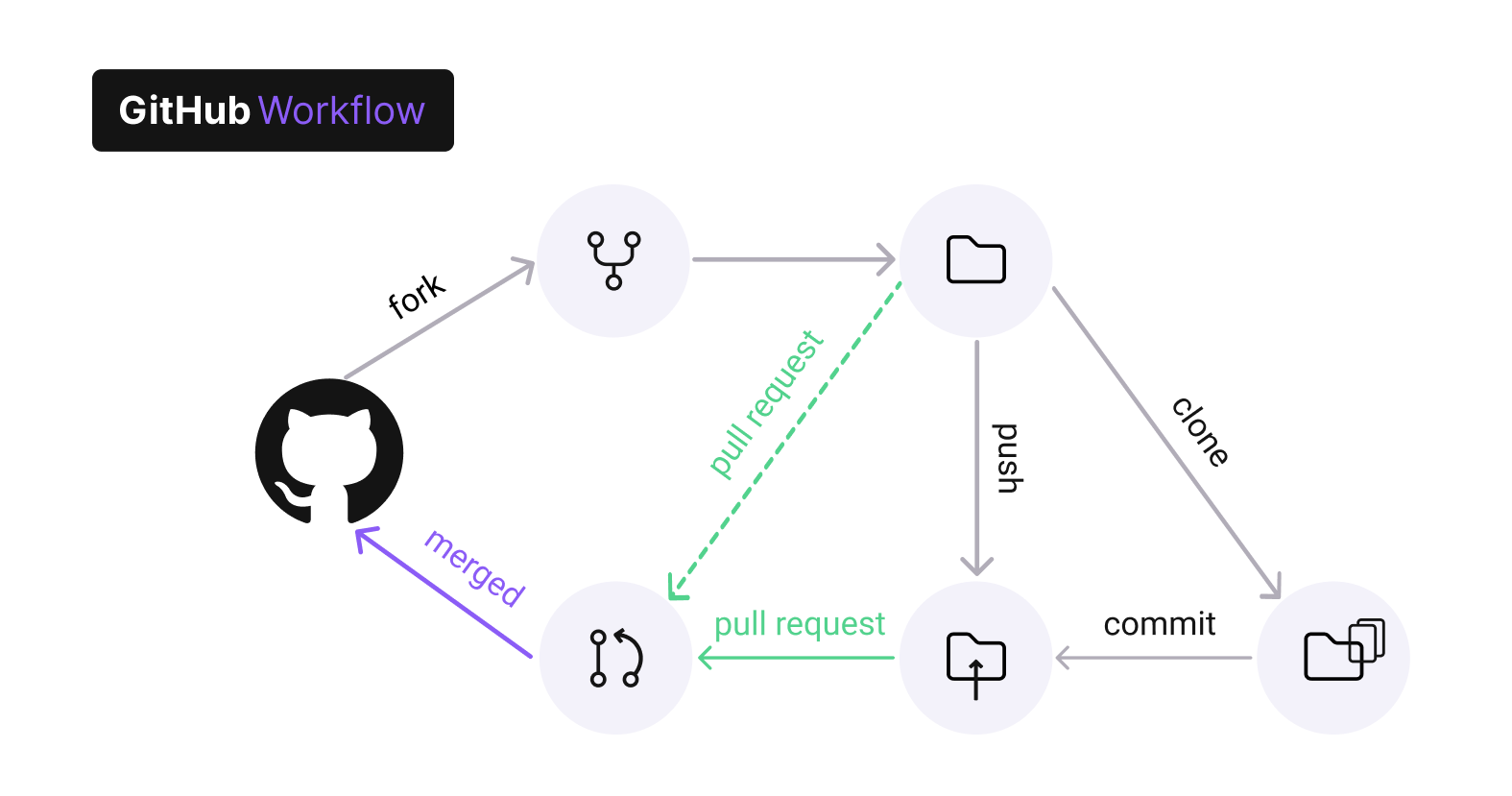 GitHub introduced two security measures to defend against this kind of malicious contribution and we will show how they can be bypassed.

This is indeed a good security measure and makes pwn request attacks more complicated. Yet, a determined adversary could gain the project maintainers trust, for example by contributing some innocent pull request (e.g., fixing a typo) and then initiating the attack.

Since external contributors are not part of the project core team, they shouldn't have access to the project sensitive secrets (e.g., DB tokens, deployment keys, etc.); hence GitHub restricts workflows from forked repositories to a read-only token which only allows users to checkout the repository code (to test, lint and more) with no access to secrets. Yet, modern workflows are usually more complex than just running tests and require some more extensive permissions to function, for example:

On the contrary, “workflow_run”, which shares the same security risks, didn’t receive the same attention, but it should. Let’s see why.

According to GitHub documentation:

“This event occurs when a workflow run is requested or completed. It allows you to execute a workflow based on execution or completion of another workflow. The workflow started by the workflow_run event is able to access secrets and write tokens, even if the previous workflow was not. This is useful in cases where the previous workflow is intentionally not privileged, but you need to take a privileged action in a later workflow.”

In short, workflow_run event is a callback that runs after another workflow is finished/requested in a privileged context. For example, if you want to label a pull request based on test results, you could create workflow_run workflow, which listens for failing workflows and then labels them. 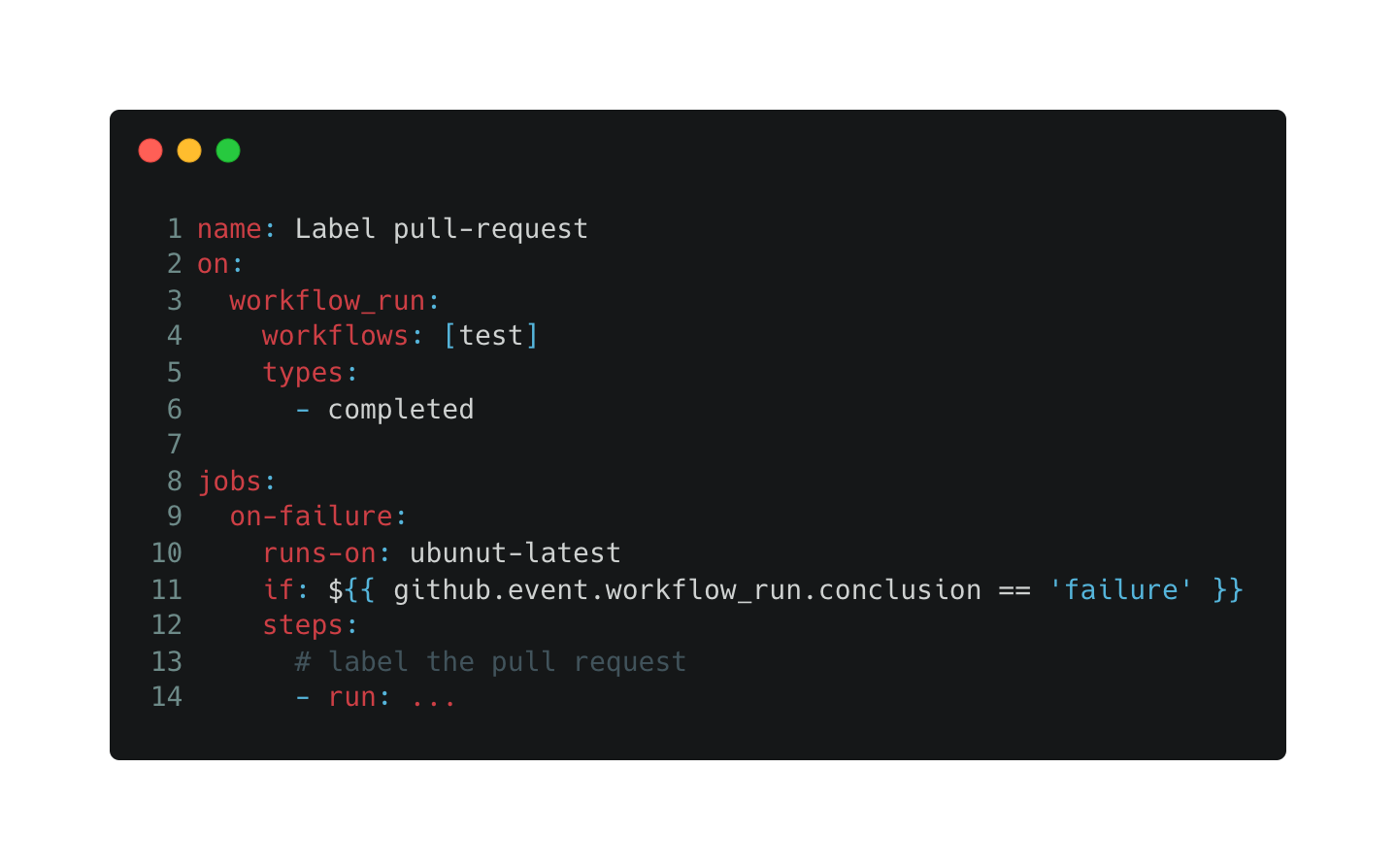 The interesting part about this event is that it could be viewed as a client-server model where the workflow_run triggered workflow is the server and the forked pull request is the client, thus as in any client-server architecture, if the server doesn’t handle client input cautiously, it may be subject to various security issues, such as file overrides, running attacker-controlled files, code injection, script injection, and more - all of which eventually allow a privilege escalation attack on the CI/CD pipeline.

Below are some examples of vulnerable workflow patterns that we have found.

The following workflow is building an updated version of the package docs whenever a package is published: 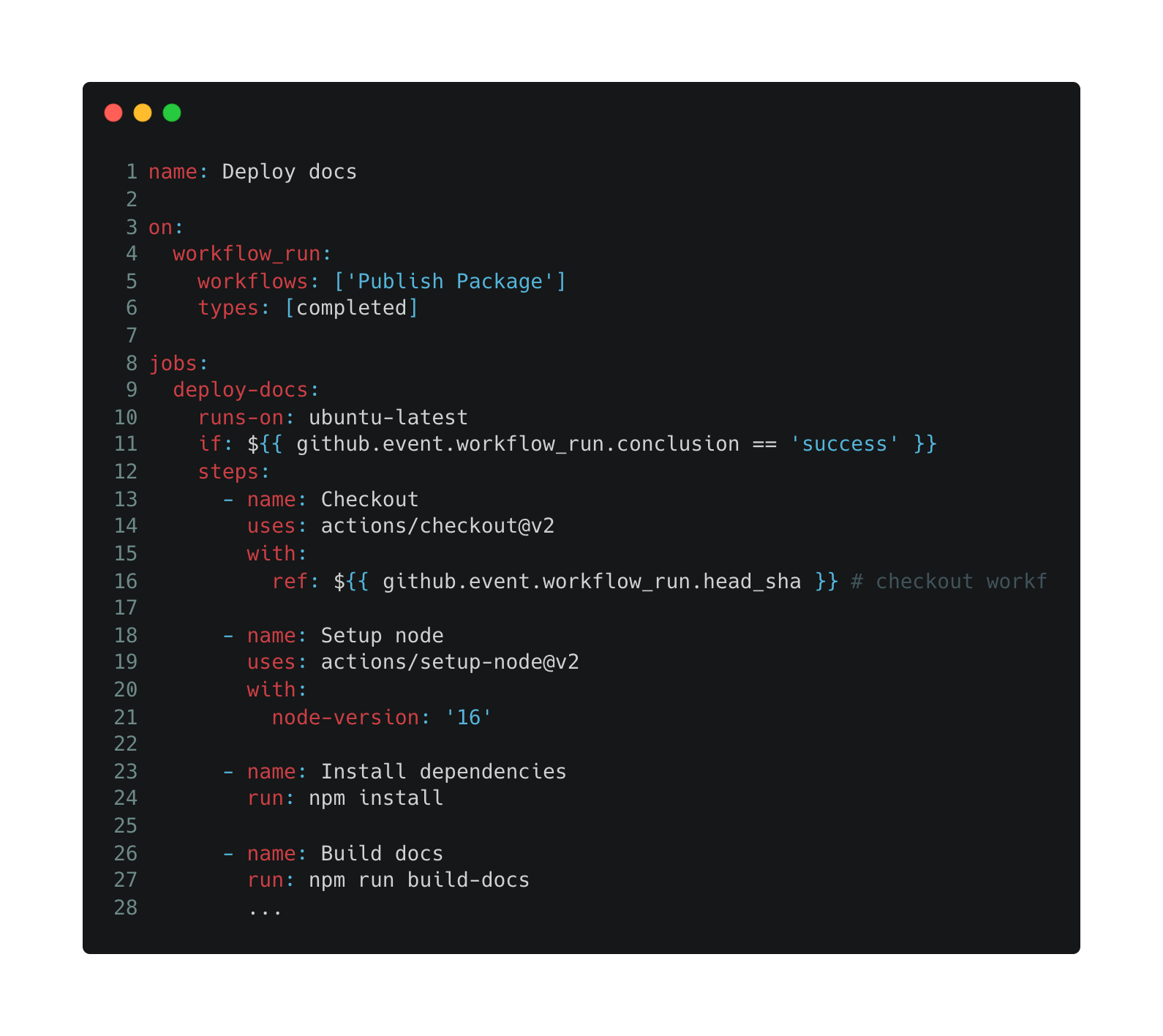 The workflow checks out untrusted code within the privileged context; from this point on, the workflow should be considered insecure; there are many ways code execution may happen, in this example, “npm install” and “npm run” are controlled by the triggering workflow.

For instance, an attacker can modify the package.json file to contain the following lines:

There are many more examples for similar attacks, from running a bash script to docker build.

You should never check out user code in workflow_run context.

2B. Insecure Usage of Artifacts

Instead of checking out the code, the advised method of communication between workflow and workflow_run is via artifacts – the unprivileged workflow runs its jobs and uploads the results as artifacts which the privileged job downloads and continue processing.

Although this is the preferred way, these artifacts should be considered untrusted and treated with caution.

In the above example, the untrusted input is interpolated inside the bash script in line 31, leading to script injection.

For instance, the below code snippet will inject attacker-controlled script into the bash command in line 31: 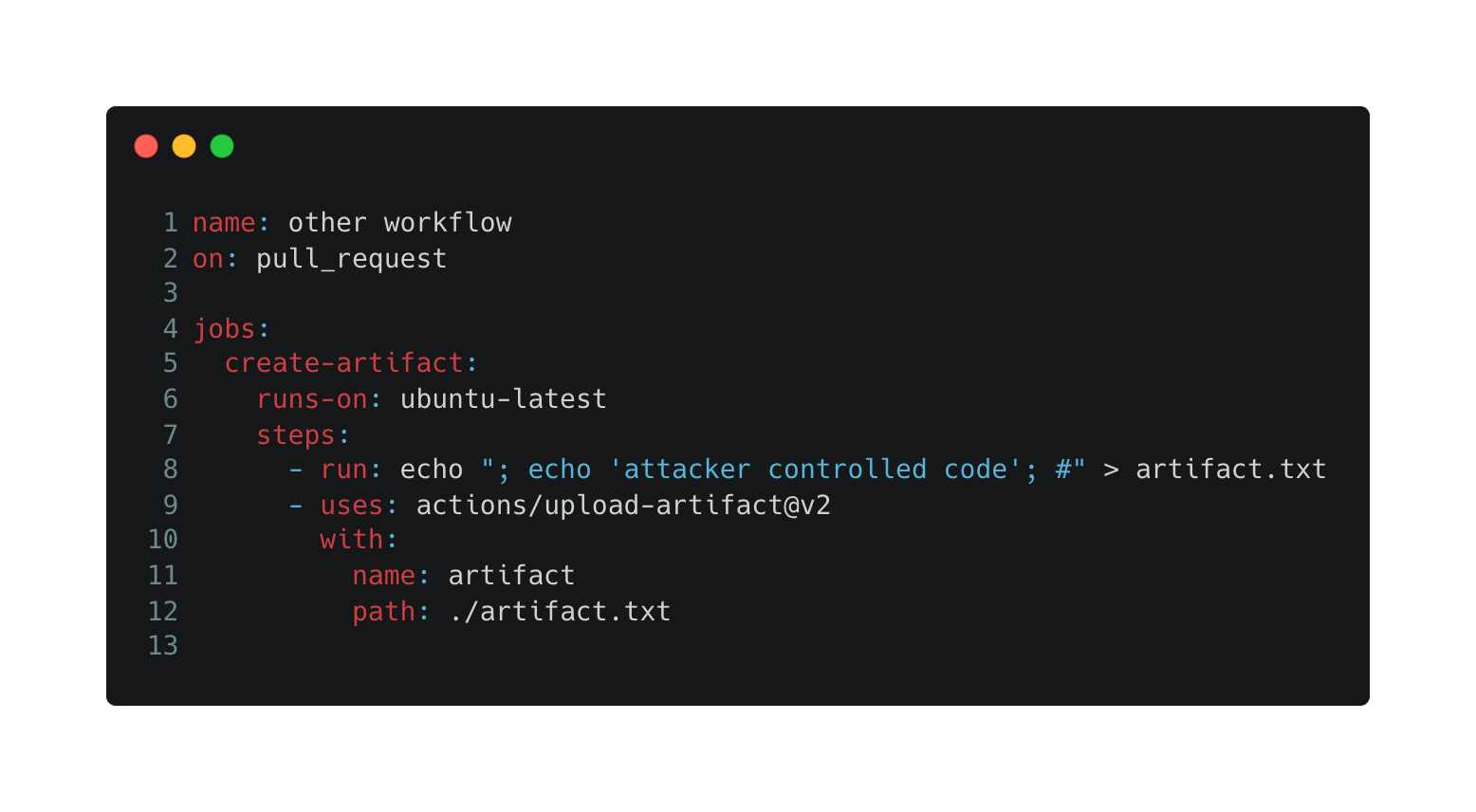 Thus, the final command after interpolation will be: “echo; echo attacker controlled code; #”.

You should always use environment variables to insert input variables inside scripts instead of using string interpolation.

The impact of taking over privileged pipeline is two-fold:

First, the attacker could modify the repository build artifacts, releases and tags and in some cases modify the main branch code, thereby initiating a supply chain attack.

Second, using the repository’s sensitive secrets, the attacker could expand the attack to additional SDLC assets.

GitHub Actions can be quite risky because of their nature (distributed, Git-Ops based – meaning your code is also CI script), and any user can submit a malicious change request that would exploit these vulnerabilities.

We have submitted our finding to GitHub, along with some suggested mitigations, and they closed our disclosure as “informational”, claiming they have published the aforementioned blogpost in the past. However, given the quantity of vulnerable repos, we believe it would be more secure to alert users in GitHub’s documentation about the dangers of workflow_run and suggest mitigating controls, such as the labeling mechanism they added in other vulnerable workflows.

We have also reached out to some of the most popular repos and alerted their maintainers that their CI/CD is at risk, how it can be exploited and suggested fixes. For example, a repository in Nginx Inc.'s organization was found to be vulnerable, and after our disclosure they fixed the issue.

What you can do to protect yourselves

How can Legit Security help

The Legit Security platform connects to your GitHub organization and detects vulnerable workflows in real-time, and much more. If you are concerned about these vulnerabilities and others across your software supply chain, consider our free Rapid Risk Assessment. The assessment takes less than 2 hours to complete and provides immediate insight into vulnerabilities across your software supply chain, including the ones listed in this post.

Or to learn more about other attack patterns documented by popular frameworks check out The 3 Riskiest Software Supply Chain Attack Patterns Across Frameworks.

Everybody is familiar with downtimes in major services. It can be very frustrating when a platform your organization depends upon becomes...